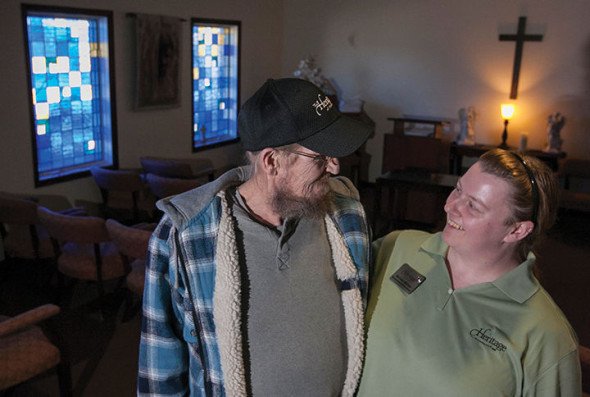 The Heritage at Fox Run Hosts Wedding For Housekeeping Director

When Melissa and Roland “Ron” Donoho decided to get married, Melissa’s “family” was there to help. The couple has been together 17 years. In January, they learned Ron has a terminal illness.“We thought we better do it now, or we’ll never do it,” Melissa Donoho said.

Melissa Donoho is the housekeeping director at Heritage at Fox Run, a Council Bluffs retirement community. Executive director Ron Perry encouraged his coworker to have the wedding at the facility. “She’s a big part of this family here,” Perry said. “It just made sense.”

On March 26, Heritage hosted its first wedding, with a number of Malone’s coworkers pitching in to help.Office director Diann Owens did alterations on Malone’s wedding dress, adding camouflage pieces for the avid hunter. Amber Jones, senior living counselor, made a sheet cake for the event, and her 3-year-old son Taven was ring bearer. Activities assistant Jane Tedesco did Malone’s hair and makeup. Cook Phil Holland’s sister, Mary Coufal, took photos, while Holland’s aunt Andrea Bollig did the hunting-themed wedding cake, replete with a deer bride and groom cake topper. The Heritage home office in Omaha donated the groom’s cake.
“We’re her family,” Tedesco said. “It was a privilege to be a part of it.”

Jones explained coming together to help their fellow employee wasn’t a hard choice.
“We all eat together, we got to talking about the wedding,” Jones said while the Donohos and Melissa’s coworkers discussed the wedding at Heritage. “I said, ‘I’ll make a cake,’ Phil said, ‘well I know someone….’ We all decided to pitch in.”